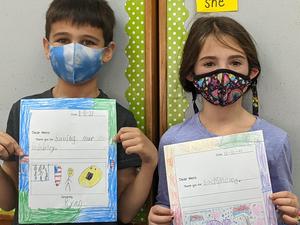 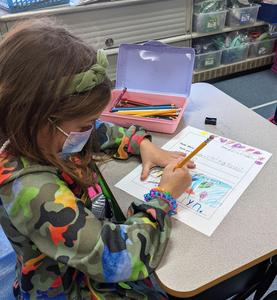 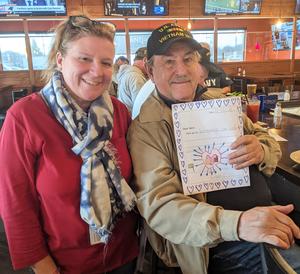 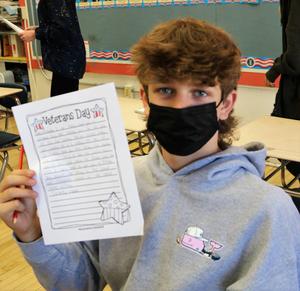 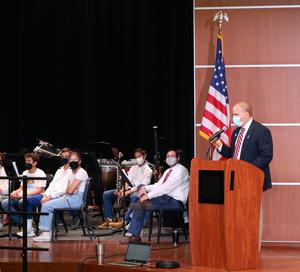 Whether writing letters and handmade cards, reading books about patriotism and heroes, holding assemblies, or learning how Veterans Day was established, students in the Westfield Public Schools paid tribute on Nov. 11 to the nation’s men and women in uniform, past and present, to thank them for their service and sacrifice.

Whether writing letters and handmade cards, reading books about patriotism and heroes, holding assemblies, or learning how Veterans Day was established, students in the Westfield Public Schools paid tribute on Nov. 11 to the nation’s men and women in uniform, past and present, to thank them for their service and sacrifice.

Seventh graders in Brian Vieth’s social studies class at Roosevelt Intermediate School utilized visual literacy skills to conduct a historical analysis of a painting by Childe Hassam entitled “Allies Day, May 1917”, which depicts New York City’s 5th Avenue festooned with the flags of the United States, Britain, and France one month after the U.S. had officially entered the first world war.  In the classroom next door, 8th graders wrote letters to veterans and current members of the armed forces while teacher Kira Brady reviewed the history of Veterans Day, formerly known as Armistice Day to mark the end of World War I.

“If you know someone in your life who is a veteran, remember to thank them for their service,” Brady told her students.

Organized by vocal music instructor Kenneth Horn and emcee’d by fellow vocal music instructor Stephen Markowski, an assembly at Edison Intermediate School included the presentation of colors and flag salute by members of Scout Troops 72/772 Emma Blaustein and Flynn Martin, patriotic medleys by the 8th Grade Band and Chorus, and a video presentation honoring family members of Edison staff who are veterans and active members of the military.

Keynote speaker and EIS social studies teacher Robert Maver - who served in the U.S. Army from 1996-1999 and in the New Jersey National Guard from 1999-2004 -- talked about his military service in Bosnia, about educating local children there to stay away from landmines, and about a young girl who, when offered a gift as part of a U.S. holiday outreach, asked for chalk and school supplies. He encouraged students gathered for the assembly to never “pass up an opportunity to talk to a family member about his or her service.”

There were other educational and heartfelt commemorations across the district, as teachers read books and led discussions on the importance of Veterans Day.  Jefferson 1st graders created handmade pictures and notes which teacher Wendy Hahn arranged with an area restaurant to be delivered to each veteran who arrived for lunch or dinner.

“It was a wonderful experience for the students and really seemed to mean a great deal to the veterans I spoke to,” says Hahn who hand-delivered some of the notes.

For a photo album of Veterans Day activities around the district, CLICK HERE.