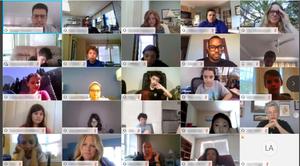 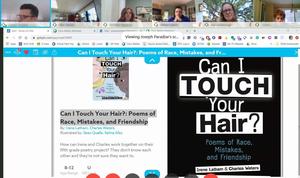 Teachers in the Westfield Public School District are providing important opportunities for students to express their feelings as they grapple with how to respond to the killing of George Floyd by a police officer and the nationwide protests that followed.

Teachers in the Westfield Public School District are providing important opportunities for students to express their feelings as they grapple with how to respond to the killing of George Floyd by a police officer and the nationwide protests that followed.

“We know you’re grappling with so many things right now,” said teacher Joseph Paradise to the students as he opened the virtual meeting.  “In addition to a pandemic, you’ve also learned a lot about social justice, race, and human rights.  You have experienced a lot in your young lives.  The overwhelming message I have heard is how resilient you all are.  That’s what prompted this summit.”

Across the district, age-appropriate classroom conversations are being held, as students are encouraged to set aside their discomfort, share how they are feeling, and to ask and answer tough questions.

Student responses included “I wasn’t surprised that something like this could happen, but it was depressing to hear,” “I think the protests are good and will make change, but I’m unsure if that change will last for more than a few years,” and “It was so sad, so unequal. I respected how everyone came together to fight for his rights. I’m surprised how violent it’s getting.”

Perrino and his students explored topics of racism, police reforms, and what the class has learned previously regarding race in America.

“We had to write an essay about Harriet Tubman and the Underground Railroad,” said one student.  “And Martin Luther King, Junior.  After his era, you would think things would change forever.  If he saw what was going on today, he would think it was all for nothing.”

Language arts and social studies teachers in the intermediate and high schools are using existing units of study to explore themes of identity and diversity, as they discuss the current state of race relations in the United States.  On June 3, the Westfield High School “No Place for Hate” Committee hosted a virtual discussion of race which was attended by more than 60 people.

“It’s super scary when it is so public and people are still denying that it is a problem,” said one student when asked for her initial reaction to the current events.  “In quarantine, you feel powerless that you can’t do anything.”

“It is so important that we hear from and listen to our students,” said Superintendent Dr. Margaret Dolan about the classroom conversations.  “These are difficult conversations and I welcome their observations and perspective.”

“In middle school, you’re forming what type of student and what kind of person you’re going to be,” said Bolton who outlined the decision to partner with the Anti-Defamation League (ADL) to form a “No Place for Hate” Committee at the intermediate level.  “We looked at the way people are treated and events going on in our society that bothered our students and they wanted a way to discuss.  We were collective in our agreement that we would not tolerate hate at our school.  None of us are perfect, but we learn from our mistakes and become better every single day.”

Marsh talked of the importance of “safe spaces” for students to get to know each other as individuals and to find commonalities.  She also noted that each individual advocates in his/her own way.  “Not everyone is comfortable protesting,” she said. “You should find what works for you to discover ways that we can move forward.”

“Overall we have great police officers, just like we have teachers, parents, nurses, doctors and others who are good.  But there are bad ones. We cannot put everyone in the same bucket. There is more good in that bucket than bad,” said Alston who recounted how a police officer helped her with directions during a recent peaceful march in Newark.  “This has overshadowed their profession.  We can’t do that.  Get to know a person before you judge a person.”

Eric Jones, who previously taught at both Jefferson and McKinley schools, told the students that when “you love someone, you see them for who they are,” regardless of skin color.

“Friendship is an action,” said Jones.  “For those who want to do something about race and equality, let’s do something.  Make a new friend!”